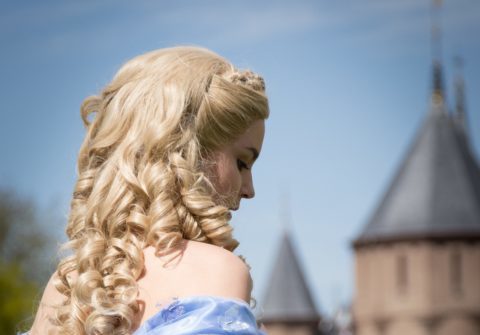 Suzette:  Thank you so much Cinderella for allowing me the opportunity to interview you. We were all glued to our televisions as we watched the Prince walk in with that one glass slipper and place it on your foot.  I could feel the intensity of that moment as I watched.  I can only imagine how incredible that was for you.

Cinderella:  Thank you Suzette.  It was.  It certainly was.  To be honest, I didn’t know it was going to become such a phenomenon.  Here we are 2 children and several years later and we still get mail from all over the world.  Mothers are reading my story to their little girls.  Married women are asking how to get their husbands to treat them like my husband treats me.  Single women tell me that they too are waiting for their prince to come.  I get asked all the time what it’s like to have gone from rags to riches and to have such a wonderful man in my life.

Suzette:  Yes, that is what all of us are wondering, especially us women.  From the first time we saw you on television or read the books written about it, we’ve all been waiting for our handsome prince.  For years, it was my dream.  That one day I’d meet Mr. Right and he would whisk me away and we’d have some babies and live happily ever after.   You have become a source of inspiration for women all over the world.

Cinderella:  Wow, that’s an honor but it can also be overwhelming at times.

Suzette:  Why do you say that?

Cinderella:  Don’t get me wrong.  Prince Charming is a good man and he loves me.

Suzette:  I hear a but coming

Cinderella:  [laughing nervously]  There is a but, but I don’t want to make it sound like I’m not grateful or that there is anything wrong.  That’s why I’m trying to choose my words very carefully.  [clears throat and sighs]  Being his wife, living in the castle, having all eyes on me all the time, it can be very overwhelming.  It goes without saying that life for me got really hard after my father died.  I went from being the apple of his eye to being the scorned of my stepmother.

My dad was a wealthy man, so nice things and all that weren’t new to me.  What was devastating however was how dramatically my life changed in an instant.  Not only was I grieving the only parent I had left but the home that was filled with so much love and laughter became a prison that I could not escape from.

Suzette:  Wow, I hadn’t considered that at all.

Cinderella:  Yes.  And though I’m so glad that my sweet Prince took me away from all that, I was immediately thrust into another situation that had so many rules and protocols and all of that.  I had to stand this way.  I had to sit that way.  Everything I did was subject to someone else’s evaluation and it was life as usual for them, but to me…but to me…

Suzette:  It felt the same.

Suzette:  I’m so glad that you are telling us the story from your point of view.   Women for years have pointed to your story as the gold standard, the brass ring. We’ve even measured men by it.  If he doesn’t have this or that, we won’t give him a second nod.   We’ve even dreamed of “our handsome prince” taking us away from where we are.

Cinderella:  I do agree that a man needs to have something of value to offer a woman.  At the same time, she needs to have something of value to offer to him too. I get concerned sometimes that, because of my story, women are spending more time trying to look like a princess instead of having a princess heart.  Or they are waiting for a man to rescue them when they have to be their own rescue.  That’s why I’m doing this interview.  Not to make my husband look bad or to seem ungrateful for this beautiful castle I get to live in and the wonderful people who serve the royal family with such devotion.  It just seems so unfair sometimes.   Just because I wear royal clothing and they serve us in this palace, I’m not any better than they are.  I sat among ashes and cinders from a little girl to a grown woman, for goodness sakes. It grieves my heart when I see people who have grown up in a palace take so much for granted and speak to those who serve as if they are less.

Suzette:  This interview is really helping me to understand the woman behind the story.  I so appreciate your being so open and honest with me.  I’ll try to treat your story with the same grace and dignity that you are telling it.

Cinderella:  Thank you.  So much of what I say gets taken out of context.  I can’t tell you how many times I’ve had to explain myself even in here.  You see, though the Prince is use to this life and it doesn’t bother him at all, it has been a huge change for me.  That and almost immediately we started being pressured to have babies.

Suzette:  Wow, that’s right.  You have a son and a daughter?

Cinderella:  Yes, they are the greatest gifts of my life.  I feel most myself when I’m with them.

Suzette:  Not with the Prince?

Cinderella:  You have to understand.  Being the heir to the throne carries a huge load of responsibility.  We didn’t get to have a honeymoon because security was afraid for his safety and for mine.  We did the best we could but it’s hard to connect when people are always around.  This would be similar to what your President and First Lady’s life would be, I imagine.

Cinderella:  We don’t get to have a moment alone.  By the time he returns from helping this one and that one, I’m asleep.  When the kids want some time with him, he’s tired or they have to do things according to protocol.  The most the kids see him is in the newspapers or on television.  Even though we all live in this castle, they don’t know what it’s like to have their father.

Cinderella:  I’m not telling you this for you to be sorry.  I know that I am blessed to have these struggles.  And I feel guilty sometimes when I hear my own thoughts about it.  I hope I don’t sound like I’m complaining.  I love my husband.  [pauses to thank servant for bringing in the tea]  I love my children.  I just didn’t think my life would be this.

Suzette:  If it were me, I ‘d find this very isolating and very lonely.

Cinderella:  [tears well up in her eyes]  Yes.

Suzette:  If you could do anything right now and know that it wouldn’t hurt anyone if you did it, what would it be?

Cinderella:  [thanks servant for handkerchief and wipes eyes]  Nobody has ever asked me that before.  You’d think that I would know exactly what to say.

Suzette:  No not really, you haven’t had a chance to think about yourself.

Cinderella:  [glancing out the window]  That’s true.  I never really thought of it that way but you’re right.  I haven’t had a chance to think about myself since my dad died.  Did you know that I wanted to be a horse woman when I was young?

Cinderella:  Yes [her eyes light up].  I use to love going on long rides with my father.  We had men we employed to take care of the horses, but when nobody else could find me, he knew where to look.  I was in the stables, brushing the horses and feeding them.  Sometimes, I just laid on the hay so I could feel their warmth.

Cinderella:  Yes.  I have always loved animals.  Had I not wanted to be a horse woman, I think I would have been a veterinarian.  If they had not helped me during those terrible years with my stepmother and stepsisters, I don’t know what I would have done.

Suzette:  I’m sorry I interrupted.  Back to your love for horses.

Cinderella:  Yes, yes, I wanted to be a horsewoman.  The people around me said that it wasn’t lady like and told my dad that it wasn’t a good idea, but he didn’t care. He taught me what he knew and the workers did too.

Cinderella:  It was the best time of my life!  I was so happy!

Suzette:  Do you want your children to learn to ride?

Cinderella:  They already know how.

Cinderella:  Oh yes!  It is one of the unwritten rules here.

Cinderella:  I was hoping that I could show them horses and riding through my eyes, but it wasn’t permitted.  I hope the rules haven’t killed out the joy.

Suzette:  I hope not.

Cinderella:  Yeah.  My daughter is a natural and she welcomes the lessons and all that.  My son though

Cinderella:  Yes, he is not excited about it.  Not. at. all.  He prefers to paint the horses than to ride them.

Cinderella:  [laughs]  Not that kind of painting them.  Painting them on canvas.

Suzette:  [laughs]  Thanks for clarifying.  I was thinking, “Oh my goodness, if he’s painting them, that’s not good.”

Cinderella:  [laughs so hard that she almost spills her tea]  That’s so funny!  [hands the cup and saucer to one servant while another places a new one on her lap] I’ll have to remember that one! Thank you [she says to both servants] Oh my, I haven’t laughed like that in a long time!!

Suzette:  [laughing hard too]  Now that we’ve got that straight.  What is the advice you’d give to the women all over the world who see your story and want to emulate it?

Cinderella:  I would tell them that love doesn’t conquer all.  You have to do that yourself.  I’d also tell them the Prince that whisks you away one day can turn into the husband that you never see the next and a life that isn’t a life at all.  Choose wisely.

Solutions For Single Over 30